If a large business or other entity meets certain eligibility criteria they're called a 'reporting entity' and must submit payment times reports.

The reporting requirement applies to large businesses that:

A constitutionally covered entity (CCE) is:

CCEs could include private/public companies, trusts, partnerships, joint ventures and sole traders. Businesses may have a wide array of corporate structures. They should seek professional advice as to whether their particular structure falls under the CCE definition.

A CCE that is a reporting entity will need to report on their small business payment terms and practices.

For example, an entity may be a CCE because it carries on an enterprise in a territory. If so, it needs to report on all its business activities in Australia not just on those conducted in the territory.

An entity that isn't constitutionally covered or that's registered under the Australian Charities and Not-for-Profits Commission Act 2012 is not a reporting entity.

Reporting entities must report, even if they don’t have any invoices to report or small business suppliers.

These constitutional corporations can include publicly listed companies in Australia. They may also include private companies, incorporated joint ventures and corporate trustees.

In determining whether an entity is a trading and/or financial corporation, an entity should first consider whether it is incorporated.

An entity should then apply the ‘activities test’. This considers:

‘Trading’ is the activity of providing, for reward, goods or services, and extends to business activities carried on with a view to earning revenue. An example of a trading activity may include a transport or health authority providing transport or health services for a fee, although possibly not if the fee is set by statute. ‘Financial’ is the activity of commercial dealing in finance, including transactions in which the subject is finance, such as borrowing and lending money.

If the income an entity receives from trading or financial activities is substantial, it may be considered to be a constitutional corporation. This is even if the income is only a small proportion of the entity’s overall income.

An incorporated entity engaged in trading or financial activities that generates a significant or substantial income is likely to be a trading and/or financial corporation.

A foreign entity, that is an entity formed outside Australia, is a CCE. As a CCE, a foreign entity may be a reporting entity where it meets the income threshold and carries on an enterprise in Australia.

Whether a foreign entity is carrying on an enterprise in Australia depends on each particular case, with relevant considerations being whether the entity has a physical presence in Australia, or otherwise provides goods or services to persons located in Australia.

Where a foreign entity is subject to income reporting to the Australian Taxation Office, this may indicate that the entity is carrying on an enterprise in Australia for the purposes of the scheme.

Entities that carry on an enterprise in a territory

Entities that carry on an enterprise in a territory are a CCE. This may cover partnerships, superannuation funds that are trusts, sole traders, etc. that operate in a territory.

Carrying on an enterprise in a territory includes doing anything in the commencement or termination of the enterprise. This includes activities done in the form of a business, as well as some other activities (for example, trade of goods or services in a territory to generate income).

In most cases, if an entity is formed in and has a physical presence in a territory, it will be considered to be carrying on an enterprise in a territory.

If you're unsure if your entity is carrying on an enterprise in a territory, you should seek professional advice.

Body corporate incorporated or registered in a territory

The term body corporate covers any artificial legal entity having a separate legal personality. These entities have perpetual succession. They also have the power to: 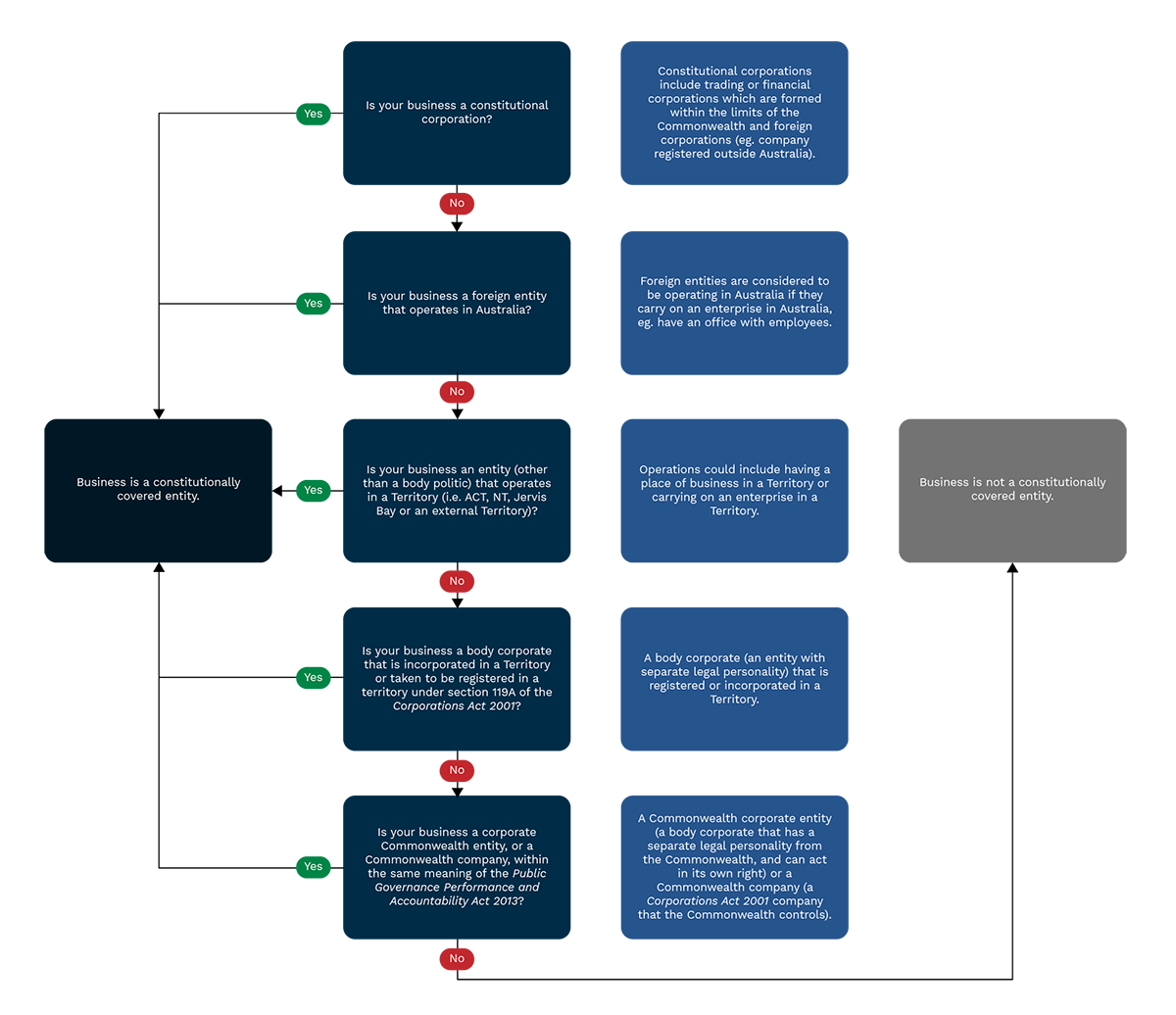 Image: Flowchart to assess whether a business is a constitutionally covered entity.

Flowchart with the following 5 questions to help determine if business is a constitutionally covered entity.

Question 1. Is your business a constitutional corporation?

Constitutional corporations include trading or financial corporations which are formed within the limits of the Commonwealth and foreign corporations. For example, a company registered outside Australia.

Question 2. Is your business a foreign entity that operates in Australia?

Foreign entities are considered to be operating in Australia if they carry on an enterprise in Australia. For example, they have an office with employees.

Question 3. Is your business an entity (other than a body politic) that operates in a territory such as the Australian Capital Territory, Northern Territory, Jervis Bay or an external territory?

A body corporate (an entity with separate legal personality) that is registered or incorporated in a territory.

Question 5. Is your business a corporate Commonwealth entity, or a Commonwealth company within the same meaning of the Public Governance, Performance and Accountability Act 2013?

A state or territory government entity may be a CCE if they are a constitutional corporation. They need to be incorporated and significantly involved in either trading or financial activities.

Government entities most likely to be constitutional corporations are:

Local government bodies aren't considered to be CCEs, but business entities owned by local government may have to report if they are CCEs and meet the eligibility criteria.

An incorporated joint venture entity that is a controlling corporation is also a reporting entity if it meets these requirements.

An unincorporated joint venture (UJV) is not an entity within the meaning of Payment Times Reporting Act 2020. It's not a CCE or a reporting entity.

While a UJV isn't a reporting entity, its manager or members may be if they meet the requirements. If they do, they must submit their own payment times reports. They wouldn't report on behalf of the UJV.

The UJV may appoint a manager or operator for its day-to-day operations. In this case, the entity may have to report on transactions in its capacity as manager of the UJV. This depends on the contractual relationship of the UJV.

An appointed manager may hold the contract for the UJV. They therefore have the contractual obligation to make the payment. In this case, if they are a reporting entity they would report on the payment(s) made under that contract. They would not need to attribute amounts provided by UJV members.

In determining if a UJV operator or manager meets the income threshold for the scheme, they should only include income distributions from other UJV members if these amounts are included in their financial statements. More specifically, if they are in their company tax returns at label 6S. If they are, these amounts could count towards their total income calculation for whether they are a reporting entity.

Both a trust and the trustee(s) can be reporting entities if they meet the eligibility requirements by:

A trust can be a CCE if it's either:

While a trust may be required to report, the Act imposes the reporting obligation on the trustee(s). This is because the trust itself does not have a legal personality.

A trustee may also be a CCE where it's incorporated (a corporate trustee).

An unincorporated trustee (an individual trustee) is not an entity within the meaning of Act, so isn't a CCE or reporting entity.

A partnership may be a CCE where it's one of the following:

As a CCE, a partnership may be a reporting entity where it also:

While the partnership may be required to report, the Act imposes the reporting obligation on the individual partners. This is because the partnership itself does not have a legal personality.